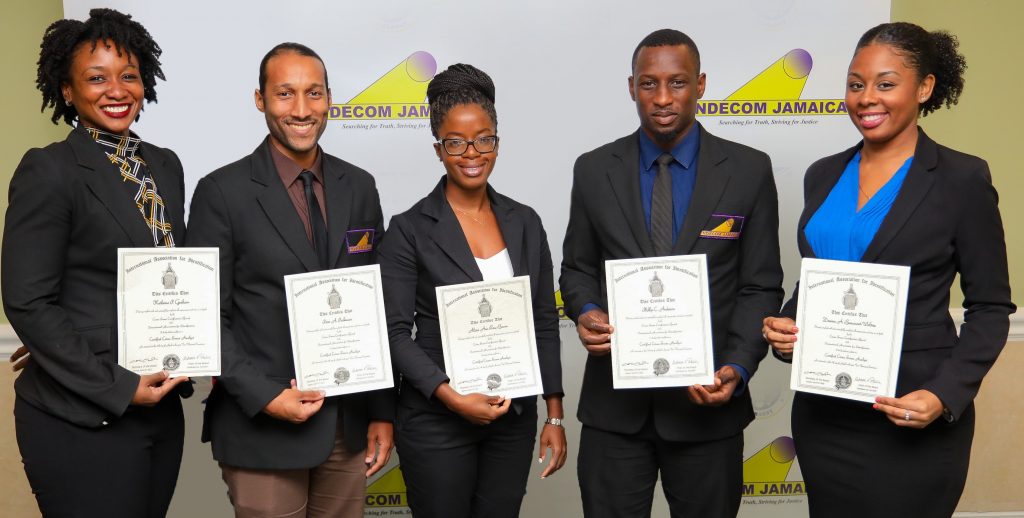 Deniece Beaumont-Walters, Alicia Brown, Kathrina Graham, Philip Anderson and Peter Parkinson applied and were notified of their success in the examinations for professional certifications from the International Association for Identification (IAI) in June. These candidates have been with the Commission for four to six years, and are all holders of academic degrees, with four having Masters in Forensic Science.

Speaking at a Commendation Luncheon, held this month, to congratulate the representatives, Head of INDECOM, Commissioner Terrence Williams noted that professional certification for the members of the Forensic Unit was always a goal once funding became available. “Continuous technical training of all members of INDECOM’s Operational Divisions is something I strongly believe in. Forensics has become even more critical in many of the incidents that we investigate and so certification from an international body will also reassure persons that our team is adequately trained and experienced in their fields. The Department for International Development (DFID), one of our international donor funders, continues to support the development of the Commission.”

The International Association for Identification is a professional membership organization, based in Florida, USA, comprised of individuals worldwide who work in the field of forensic identification. The IAI remains the oldest and largest forensic science/identification association in the world. The successful INDECOM candidates have been members of the association since 2014.