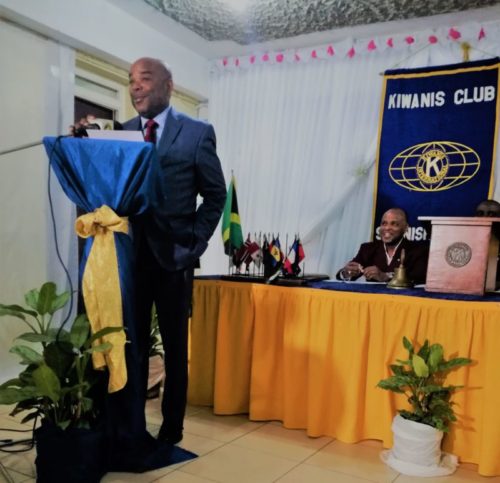 at the Kiwanis Club of Spanish Town

I am sure you have often heard the claim that INDECOM has reduced police effectiveness causing an increase in crime. Some even say that the first step to reduce crime is to end INDECOM as we know it. These claims are dismissed by many as unfounded and illogical, but the effort to convince by repetition continues relentlessly.  Of course there are some who may argue that the police must have a “free hand” and advocate that our national problem will be resolved if the police can act free of regulation and oversight. Those who peddle these arguments are then faced with this question: “Are you saying that the police cannot be effective if they are to be accountable for their actions?”

This evening a different approach will be taken in a reply, based purely on objective statistics. Has the advent of INDECOM been coincidental with an increase in murder?

Recall that INDECOM started its full operations in April 2011. Table 1, shows a general decline in murders since 2011. The average annual rate for 2004 to 2010 is 1554 murders per year whilst from 2011 to 2017 it is 1226. Thus there were, on average, 300 less murder victims since the introduction of INDECOM. It is also useful to further contextualize these figures against the population of Jamaica and in so doing let us turn our attention to the murder rate per 100,000 persons for the period stated above. The average murders per 100,000 for the pre-INDECOM period was 57.90 compared to 45.86 per 100,000 persons during the INDECOM period.

Similarly, the JCF statistics also reveal that the number of police officers killed has significantly declined since the inauguration of INDECOM. All murders are deplorable but the killing of a police officer is particularly so given the fact that we depend on these brave men and women to preserve our social order.

On these facts, the claims that INDECOM’s existence contributes to the rise in crime in Jamaica and that the police need a “free hand” to fight crime is not supported. The search for causes and solutions for our endemic crime problem must therefore be sought elsewhere.

If we are looking at reasons for our high murder rates, we should consider the period after the year 2000 with consistently more than 1000 per year; and note the conditions that continue to prevail namely, the failure to effectively address organized crime.

If we are seeking solutions we should further look at the post 2010 period when murders were reduced by almost 40%. Professor Anthony Clayton, continues to point out that “this significant reduction in such a short time was seen almost nowhere else in the world before” and that “Jamaica did not follow through with the measures necessary to solve the crime problem and so we have returned to where we started”. It is submitted that the needed “follow through” was to get to the root of organized criminal gangs and to fully institute community policing.

Nicaragua, can provide some examples of how to sustainably reduce crime. Nicaragua’s neighbours, El Salvador, Guatemala and Honduras, all suffer from high per capita murder rates. Honduras and El Salvador are amongst the highest in the world at 86 and 70 murders per 100,000 respectively. In 2015, Nicaragua’s murder rate was 7 per 100, 000 persons. Remarkably, Nicaragua maintains this low murder rate although, there is free movement of people in the region and so criminals can easily cross borders to commit crimes; despite being poorer than its neighbours, and having the lowest ratio of police to the population.

Nicaragua engaged in significant police reform to root out corruption. The model of policing is a preventative and proactive one rooted in the heart of the community. Strong intelligence networks are employed especially in areas where organized crime is prevalent. Nicaragua recognized that repressive policing only achieves short term results. Jamaica can certainly learn from the Nicaraguan proactive community based policing model, because it is inclusive and instills a sense of confidence in the police service, one supported by a strong accountable and professional policing framework.

Another argument too often heard is that the police are less responsive to criminal activities because their morale is adversely affected by INDECOM’s investigation and charges. However, since inception only a small percentage of investigations have ended in charges. Further in 2014, the year of the greatest number of charges laid by INDECOM, also saw the lowest number of murders (1005) for 11 years. Notably, as seen in Table 2, where murders and police fatal shootings are considered together, the general tendency of an increase in fatal shootings when murders increase, continued after INDECOM started operations.

Consider Table 2 again. You may note three things. First, that, for a generation, we have had high rates of police involved killings but that these killings have declined since INDECOM started its operations. Secondly, there was a 16.25% decline in murders between 2013 and 2014 and in the same year a reduction in police fatal shootings by 55%. Thirdly, that the consistent high rates of police involved killings seem to have had no lasting effect on the murder rate.

The Ministry of National Security’s 2008 JCF Strategic Review: A New Era in Policing in Jamaica found that the JCF had weak internal accountability and was hobbled by endemic unlawful cultures. It is unfortunate that this Review is not more often consulted. It was the product of an august panel assembled by the State towards finding ways to improve the JCF. The Review is freely available online. I invite you to read it. Please pay particular attention to the “corrupt practices that have become endemic” frankly outlined on page 26. In the face of such unlawfulness how could the JCF be effective?

The Review called for “concerted, long term and coordinated effort” by the JCF and its oversight bodies to tackle the malignant cultures in the police force. INDECOM is playing its part in this very effort, yet naysayers continue to claim that this endeavor is stymying the work of the police. The JCF’s cultures rendered it ineffective to control crime and instead contributed to crime. These cultures could not have taken root unless they benefitted a group of persons and that group remains loathe to see the change that will relieve them of such improper advantage.

A disciplined police force cannot operate contrary to the law and in a state where some of its members are in continuous disaffection. Resisting and scapegoating the oversight mechanisms will only delay the needed change and distract from the real causes of crime.

The advent of INDECOM and the overall reform of the JCF to promote accountability, ought to result in a sustainable reduction in crime. But, a resistant JCF retards such improvement.

There is nothing to suggest that the work of INDECOM has caused an increase in crime. An accountable police force is an effective police force.